Lupins are legumes with striking spikes of flowers of various colours that are known and loved by gardeners the world over. However, their value extends far beyond the aesthetic. Lupins are important ecological ‘engineers’, able to colonise extremely impoverished soils such as coastal sand dunes and new lava soils set down by recently erupted volcanoes1. Lupins manage to thrive on low nutrient soils due to their ability to fix atmospheric nitrogen in symbiosis with bacteria and to take up phosphorus efficiently from soils. These valuable properties led to its cultivation as a green manure and grain crop in Egypt as far back as 2000 BC2. Lupins were widely grown by the Romans who gave it the name ‘lupinus’, meaning ‘wolf’ (the reason for the name is obscure but may relate to the mistaken assumption that lupin extracts the goodness of the soil since they thrive on low nutrient soils where other crops struggle). In parallel, lupins were cultivated in South America as long ago as 1000 BC. While the popularity of lupins as crops has declined in many areas over recent years, this trend may be reversed as its value as a ‘super-food’ for fighting obesity and diabetes becomes increasingly recognised3.

Narrow-leafed lupin holds a special place in Australian agriculture. Not only does it remain the most important grain legume in Australia, it is arguably the only grain crop to be fully domesticated in Australia (by J.S. Gladstones at the University of Western Australia in Perth in the 1960s). There was therefore no controversy in selecting narrow-leafed lupin to be the reference lupin species for the Australian lupin genome sequencing project. 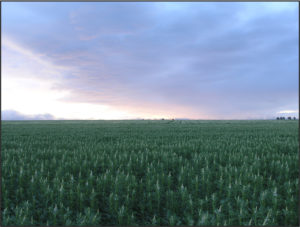